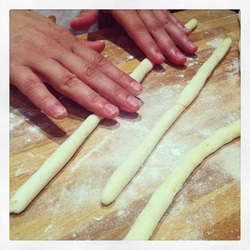 Boil the potatoes, peal them and, while they are still warm, crush them very well  with a potato masher.
Once they are cooled down, mix the potatoes with the flour, a bit of salt and a whole egg.
The egg is not essential, you can also prepare the gnocchi only with only potatoes and flour, but my grandmother always added an egg to give better consistency.

Once mixed, you get a dough soft enough (but not too much, vice versa, the gnocchi will make a "jelly" after cooking), to be worked by the hands.
Take a small portion of dough, roll it to make a stick of the size of a finger and cut in into pieces of a couple of centemeters long: here are ready your gnocchi!

There are some people who makes a further phase.
After giving a nice floured surface, take a gnocco at a time and pass it on the inside of the fork pushing softly with the finger to give a semi rounded shape to it and a little concavity in the middle.
Cook in salted water: when they are cooked to a boil.

NB: 1. never boil the potatoes without the skin!
2. during the preparation of the dough, work it as little as possible. 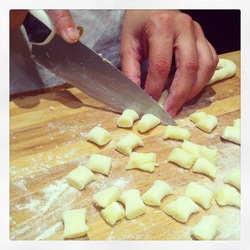 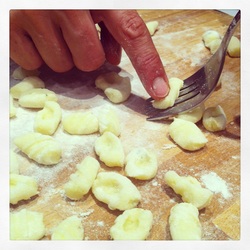 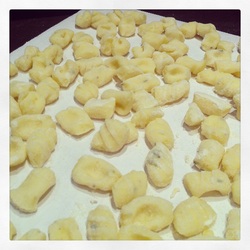